It's much smaller, two proper rear doors and will certainly be a crossover

Tucked deep in the back left corner of Toyota's pictures highlighting its unveiled fleet of future electric vehicles was the model that arguably has the potential to be the biggest hit of them all: the Compact Cruiser EV.

Even from afar it's clear what it is: a reborn FJ Cruiser, albeit smaller, electric and almost certainly a crossover. The front end styling is unmistakable even if the trademark round headlights have been swapped out for more modern LED units. The profile indicates a more conventional squared-off rear end and four proper doors. The FJ Cruiser had rear-hinged half doors. It also barely looks like a concept. If Toyota doesn't build something that looks 90% like this, we'd be stunned. 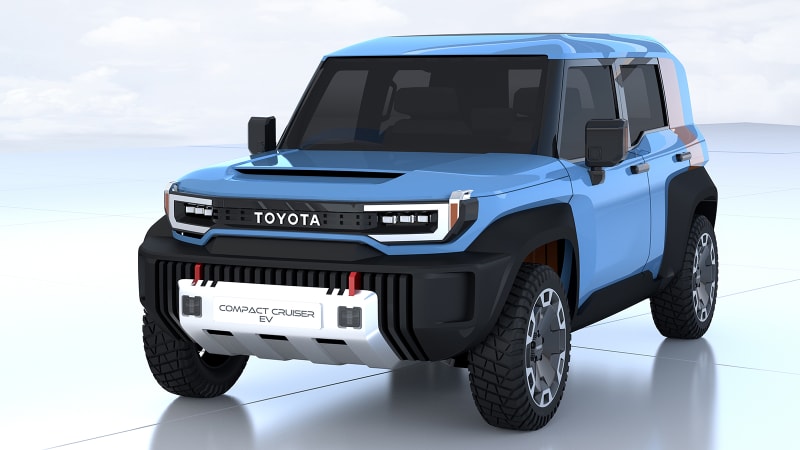 Indeed, considering how well received the Ford Bronco Sport has been, it's no surprise that Toyota would look to pull off something similar inspired by the company's own off-roading icons, the Land Cruiser and subsequent FJ Cruiser retro homage. Also, keep in mind that the FJ Cruiser remains a massive hit years after Toyota stopped making them, with truly insane valuations on those built in the later production years with low miles and/or the extra-popular Trail Teams Edition. They go for well north of the original asking price, while even those with high mileage go for around the original MSRP. And that was the case before used car prices went nutty.

In other words, the FJ Cruiser is more popular today than it was when it was new, meaning that Toyota needs to bring the Compact Cruiser EV to market as soon as it can. Of course, it'll obviously be a much different vehicle, but with what seems like ample clearances and Toyota's experience in making serious off-roading machines, it could have real potential on rocks and mud. That it would be electric is icing on the cake. This is one to be excited about.