No major updates for '22, but there didn't really need to be

Ford's baby Bronco is an authentic foil to the big Bronco 2-Door and 4-Door. It brings rugged styling, better-than-average off-road capability and thoughtful utility features to a generic segment of cars.

It's also intended for a different sort of buyer. Instead of focusing on off-roading as the reason for your journey, the Bronco Sport is for those who might have to off-road on the way to wherever they're going. We're talking campers, hikers, kayakers, etc. And for them, the Bronco Sport delivers. It does indeed have better off-roading capability than other top midcompact SUVs, especially the Badlands and its robust turbo-four engine, while plenty of thoughtful touches throughout are suited specifically for the rigors of outdoors-ing. At the same time, the Bronco Sport isn't as comfortable or sharp to drive on road than those other midcompacts, nor would its interior space be considered family friendly. For the right type of buyer, though, the Bronco Sport is a great, distinctive choice and definitely not a knockoff.

After being all new last year, there are no significant changes for 2022. Feature content in some optional packages has changed a bit and there are three new colors: Bronze Smoke, Hot Pepper Red and Velocity Blue. Kodiak Brown and Rapid Red are discontinued. 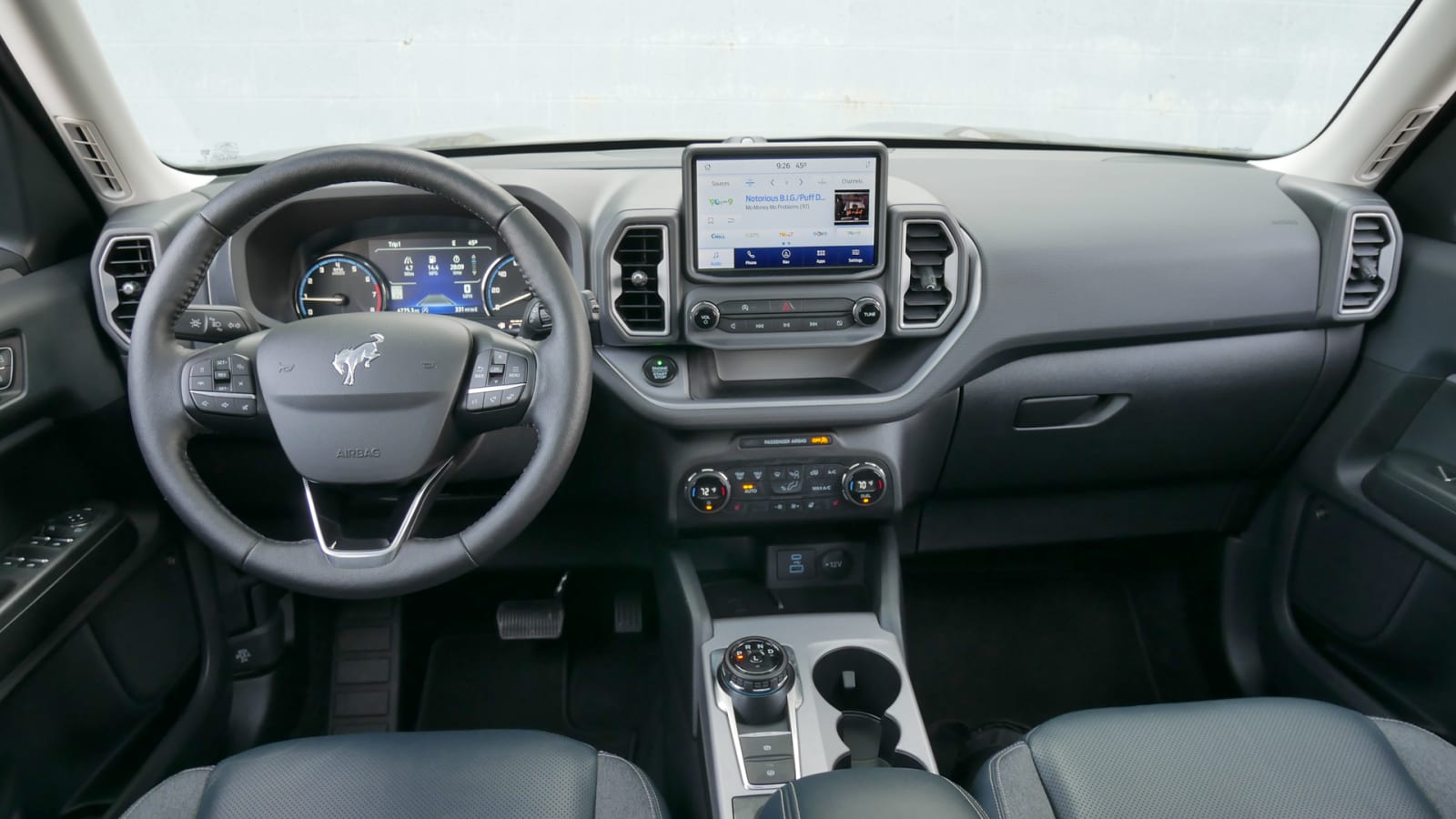 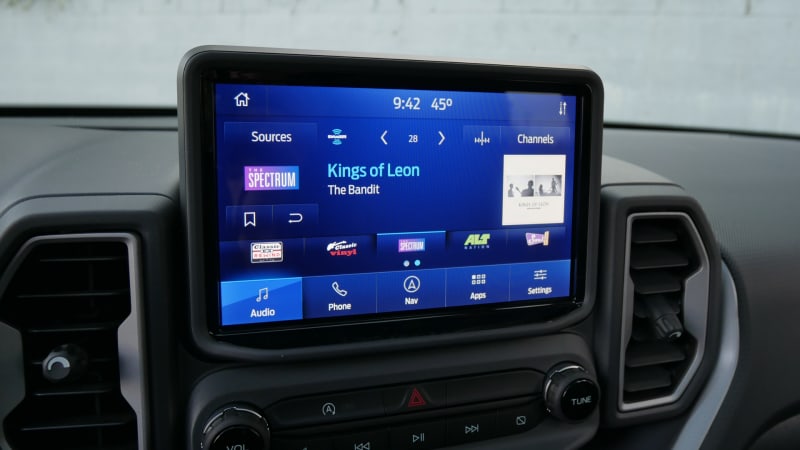 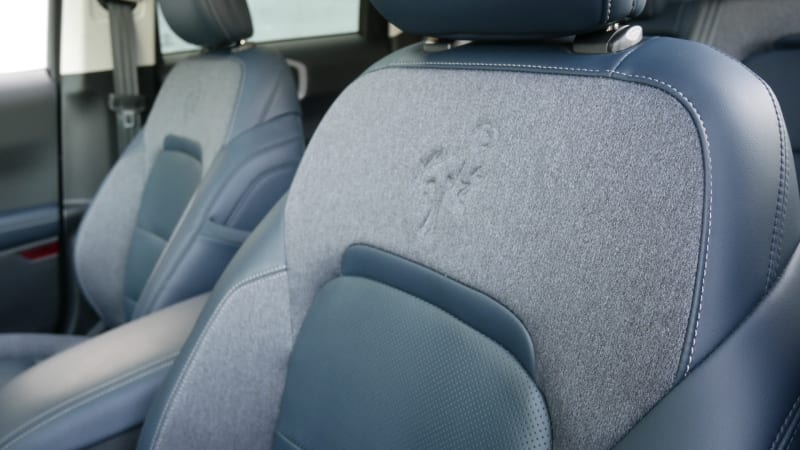 What are the Bronco Sport interior and in-car technology like?

The Bronco Sport feels like a little truck inside. You sit in an upright position and gaze over a long, straight hood with two large power bulges. Compared to the mechanically related Escape, the Bronco Sport's unique cabin design is more upright and utilitarian. The air vents are high, straddling the shared 8-inch touchscreen, freeing up space for a handy shelf for a phone or something else small. There are also nifty touches like the rubberized, graspable adjustment prongs on those air vents, plus high-quality pieces like the spongy soft-touch dash and sturdy GOAT Modes dial (that would be Go Over Any Terrain, the Bronco term for off-road drive settings). Admittedly, there are cheaper plastics in the Bronco Sport than you'll find in other top-rated midcompact SUVs, but at least Ford's use of color and fabric choices in certain trims makes up for it in some respects.

Interior storage is also exceptional. Beyond the multiple storage solutions up front, there are numerous features as you move rearward for weekend hiking and camping warriors. Certain trim levels get zippered pockets and MOLLE straps on the front seatbacks (how has no one thought of these before?), the liftgate has two LED camp lights and big grab handles that can double as a place to hang wet items, and the raised roof rails are the robust real deal (not raised or fake rails with fixed attachment points). Plus, there's also the extensive outdoor lifestyle option and accessory list, which includes in-vehicle dual-bike storage capability and rubberized easy-to-clean flooring.

The infotainment system is Ford's previous-generation software (the big Bronco, F-150 and Mach-E get the newer Sync 4) and is not the quickest unit out there, but it's still easy to use and presents well. Four USB ports are standard. A 4.2-inch central screen in the cluster is too, but higher trims offer a larger 6.5-inch screen in between the physical gauge set. 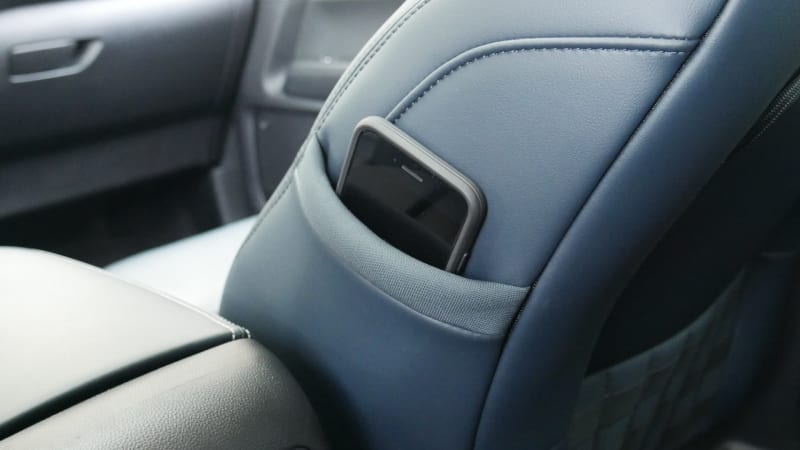 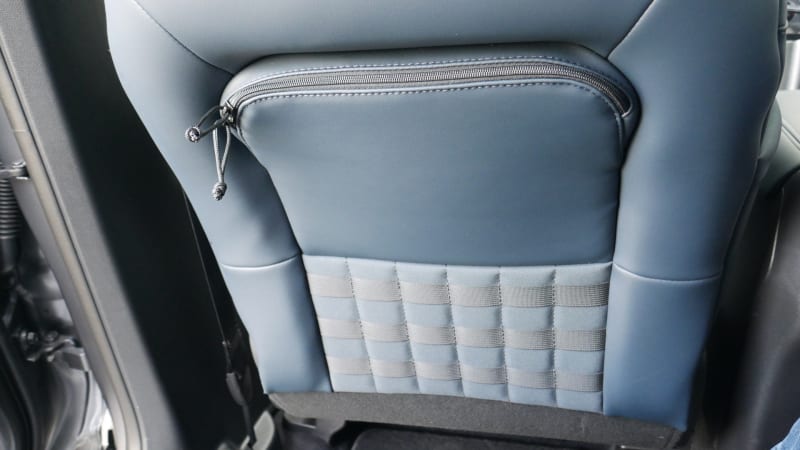 How big is the Bronco Sport?

While the Bronco Sport may ride on the Escape’s platform, it’s a good deal smaller than the Escape in overall size. It measures up closer to midcompact SUVs like the Jeep Compass, Kia Seltos and Chevy Trailblazer. The small size is great for off-roading in tight situations, but it’s less family friendly than many other more road-oriented crossovers.

You can comfortably seat adults in the back, but it's far from the most spacious in the midcompact segment. Its 36.9 inches of rear legroom is comparable to the Mazda CX-30 and a touch smaller than the Jeep Compass. The VW Taos is considerably larger. As such, a rear-facing child seat is a tight fit, so this isn't the best choice for families despite having plenty of cargo capacity to do the job. Indeed, its 32.5 cubic feet of space behind its raised back seat blows away crossovers that are similarly sized on the outside and rivals those that are much bigger like the Honda CR-V and Toyota RAV4. In fact, you have to slide the Ford Escape's back seat far forward in order to match the Bronco Sport's luggage-carrying capability. How is it possible? When it comes to cargo, boxes are better. We dig deeper into the Bronco Sport's cargo capacity in our luggage test, and after testing its competitors, found it to currently be the best in its segment. 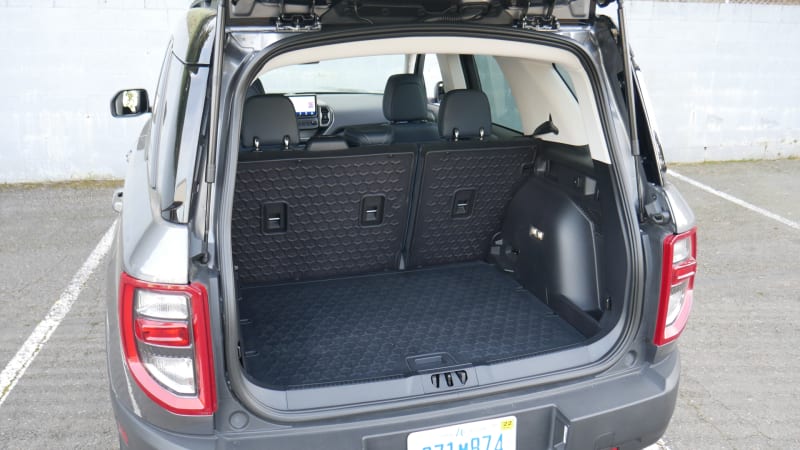 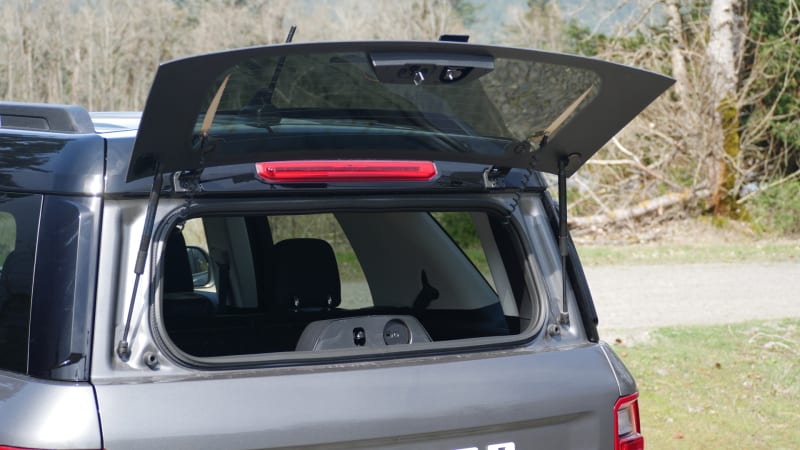 What are the Bronco Sport fuel economy and performance specs?

The base engine in most trims (Base, Big Bend, Outer Banks) is a 1.5-liter turbocharged three-cylinder that produces 181 horsepower and 190 pound-feet of torque. It’s paired to an eight-speed automatic transmission, and all-wheel drive comes standard. Fuel economy is rated at 25 mpg city, 28 mpg highway and 26 mpg combined. This is considerably lower than most midcompact SUV competitors, but the same as the similarly off-road-oriented Subaru Forester Wilderness and just a bit lower than the Toyota RAV4 TRD Off-Road.

Exclusive to the Badlands is a 2.0-liter turbocharged four-cylinder. This engine puts out 245 horsepower and 275 pound-feet of torque, which is far more than the midcompact norm and those bigger, off-road-oriented SUVs. It’s also mated to an eight-speed automatic transmission, but it adds a torque-vectoring rear differential to the rear axle for better off-road performance. Fuel economy falls even further to 21/26/23 mpg with the bigger engine. 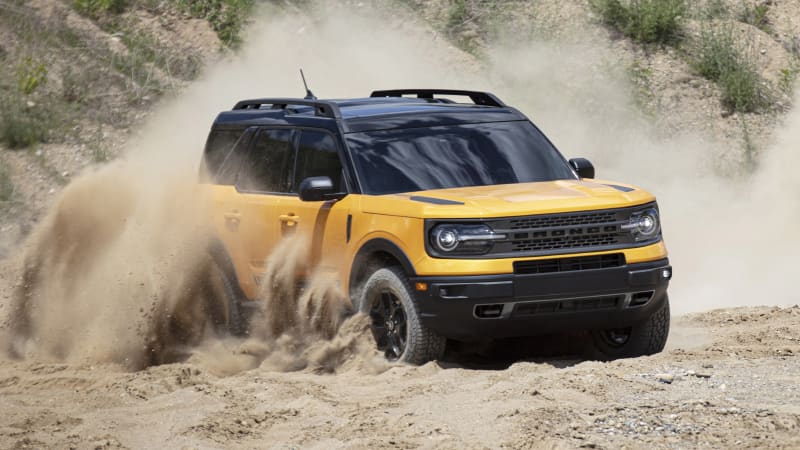 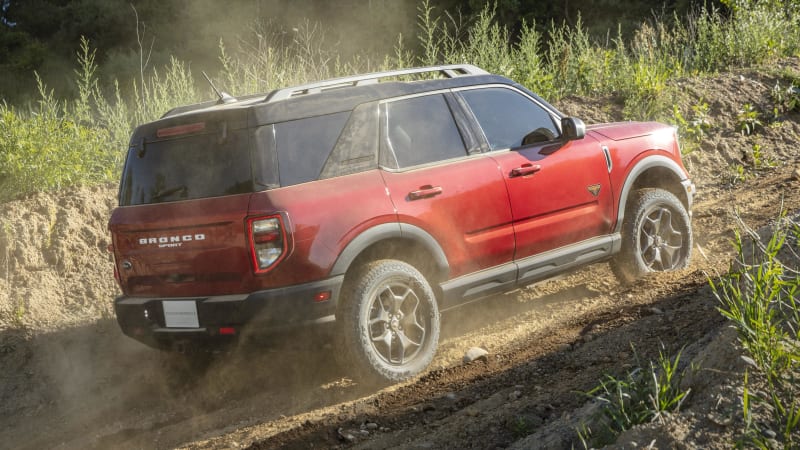 The Bronco Sport is charming and different in this class of largely similar driving experiences. The steering has a hint of play/liveliness, making for a small truck feeling on the road, but still possesses the precision we've come to expect from Ford's cars and crossovers. Regardless of trim level, there’s an extra bounce and stiffness to the on-road ride you don’t get in other crossovers this size, likely the result of its shorter wheelbase and off-road-ready suspension. That doesn’t translate into corner-carving prowess, as the Bronco Sport is a little sloppy when you start to push. More on-road-intended competitors like the Kia Seltos, VW Taos and Mazda CX-30 have both superior ride comfort and better handling. So too does the mechanically related Ford Escape.

When off-road, though, the Bronco Sport shines and is way better than you might expect. Each GOAT (Go Over Any Terrain) mode makes the Bronco Sport drive noticeably different by altering the all-wheel-drive torque split, transmission shift points, traction control/stability control settings, throttle tuning, brake tuning and steering weight. It's also important to note that the Badlands has an extra inch of ground clearance over the other versions. While inching along a trail, we could hear an Outer Banks and Big Bend Bronco Sport bottoming out in places where our Badlands was just fine. Its torque-vectoring all-wheel-drive system was also beneficial when driving in sand. At the same time, no one will mistake the Sport for its big Bronco brother. It's still a crossover and intended to be quieter and more comfortable on-road at the expense of capability off-road

The 1.5-turbo is not especially quick, but is peppy and has the gravelly bulldog-ish growl that's typical of a three-cylinder. The transmission just melts into the background, which is just as well for a vehicle like this — it neither frustrates nor wows. As standard powertrains go, you can do a lot worse in the compact crossover realm. That said, you can also do a lot better and go with the 250-hp 2.0-liter found in the Badlands, which is further paired with an upgraded, torque-vectoring all-wheel-drive system that's as much a benefit on road as it is off. It should be offered in more trims.

What other Ford Bronco Sport reviews can I read?

A closer look at the Bronco Sport's design and engineering, including driving impressions on and off-road. 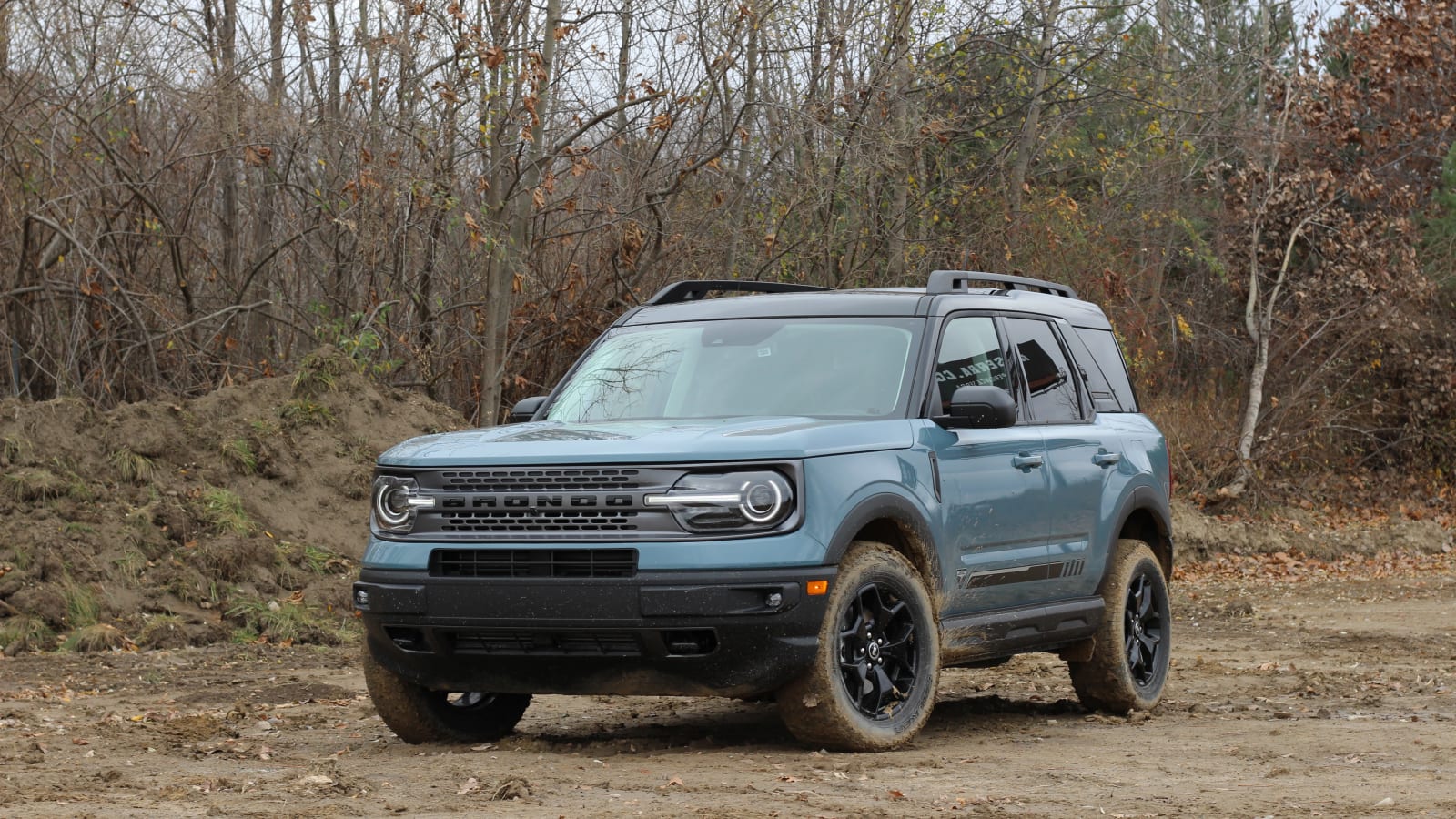 A look at the range-topping Badlands, specifically, including its unique 2.0-liter turbo engine and torque-vectoring all-wheel-drive system. 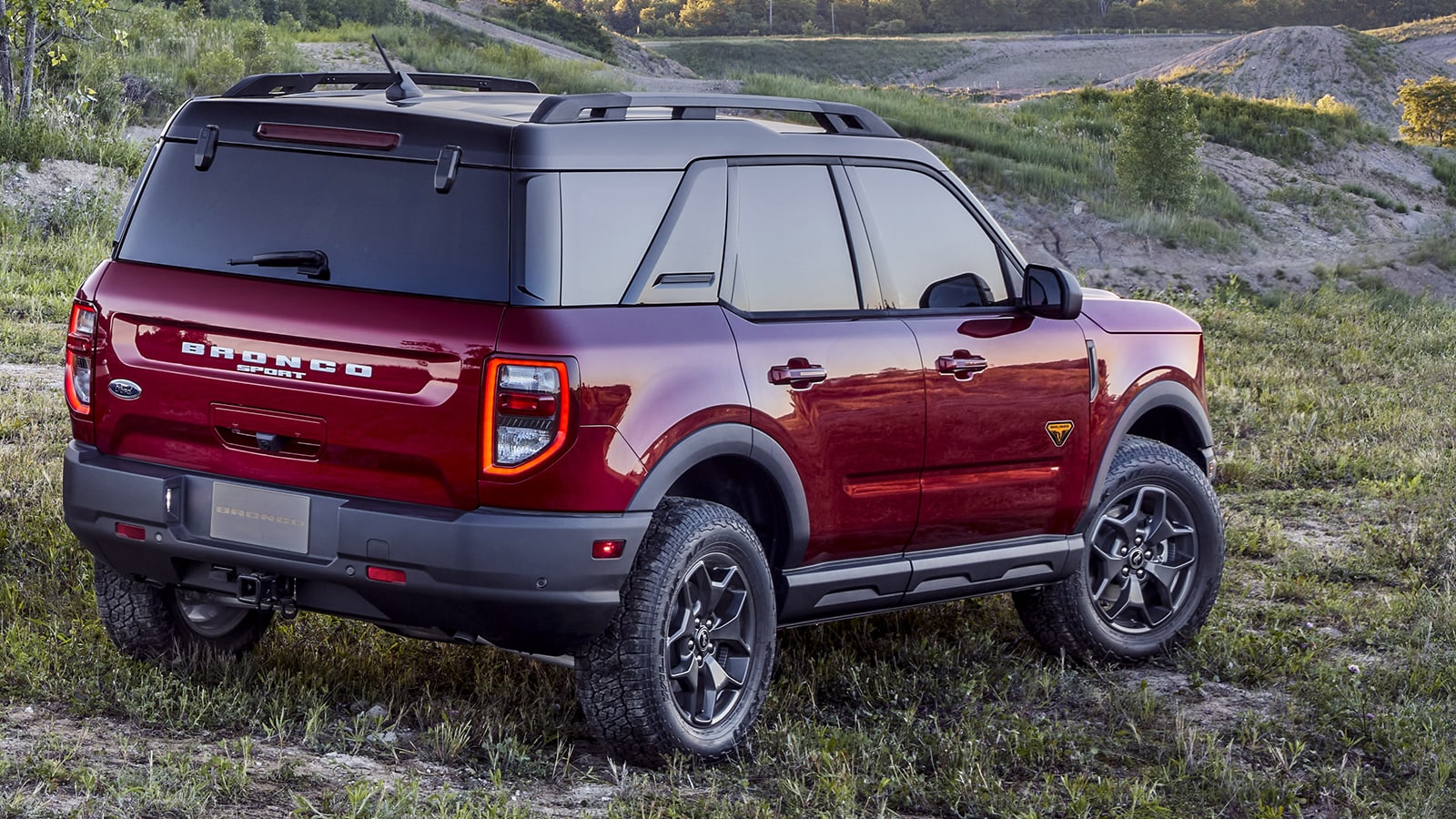 There are a multitude of clever storage solutions inside the Bronco Sport, from MOLLE strap connectors to an in-car bike rack. We go over everything in this review. 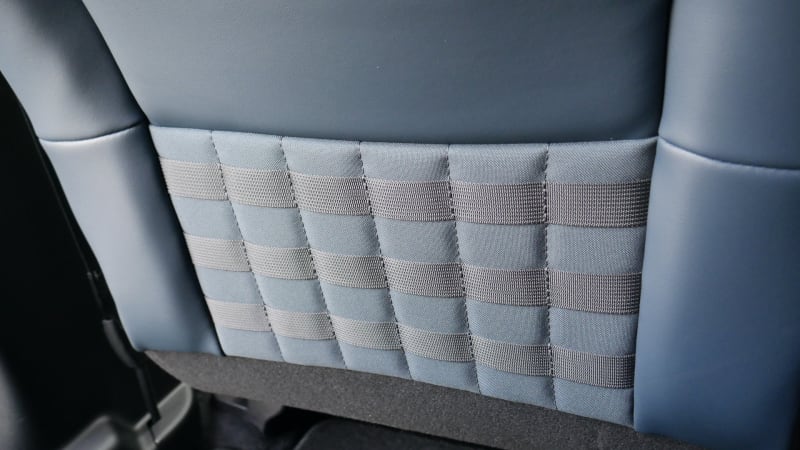 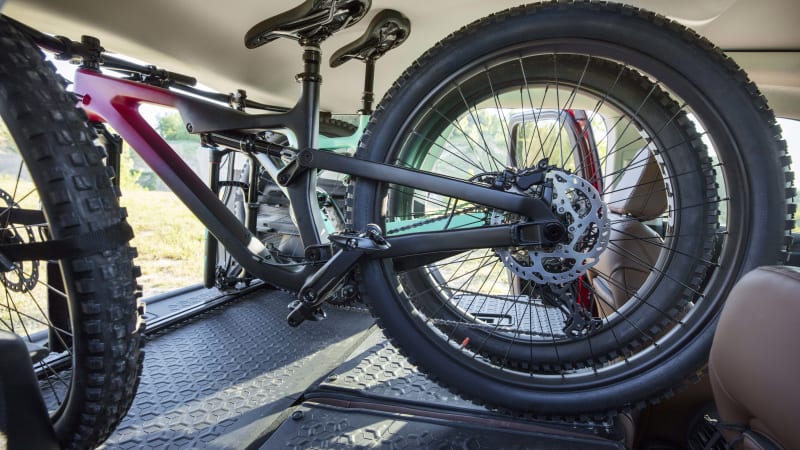 Find out how much real-world cargo space there is behind the Bronco Sport's back seat. 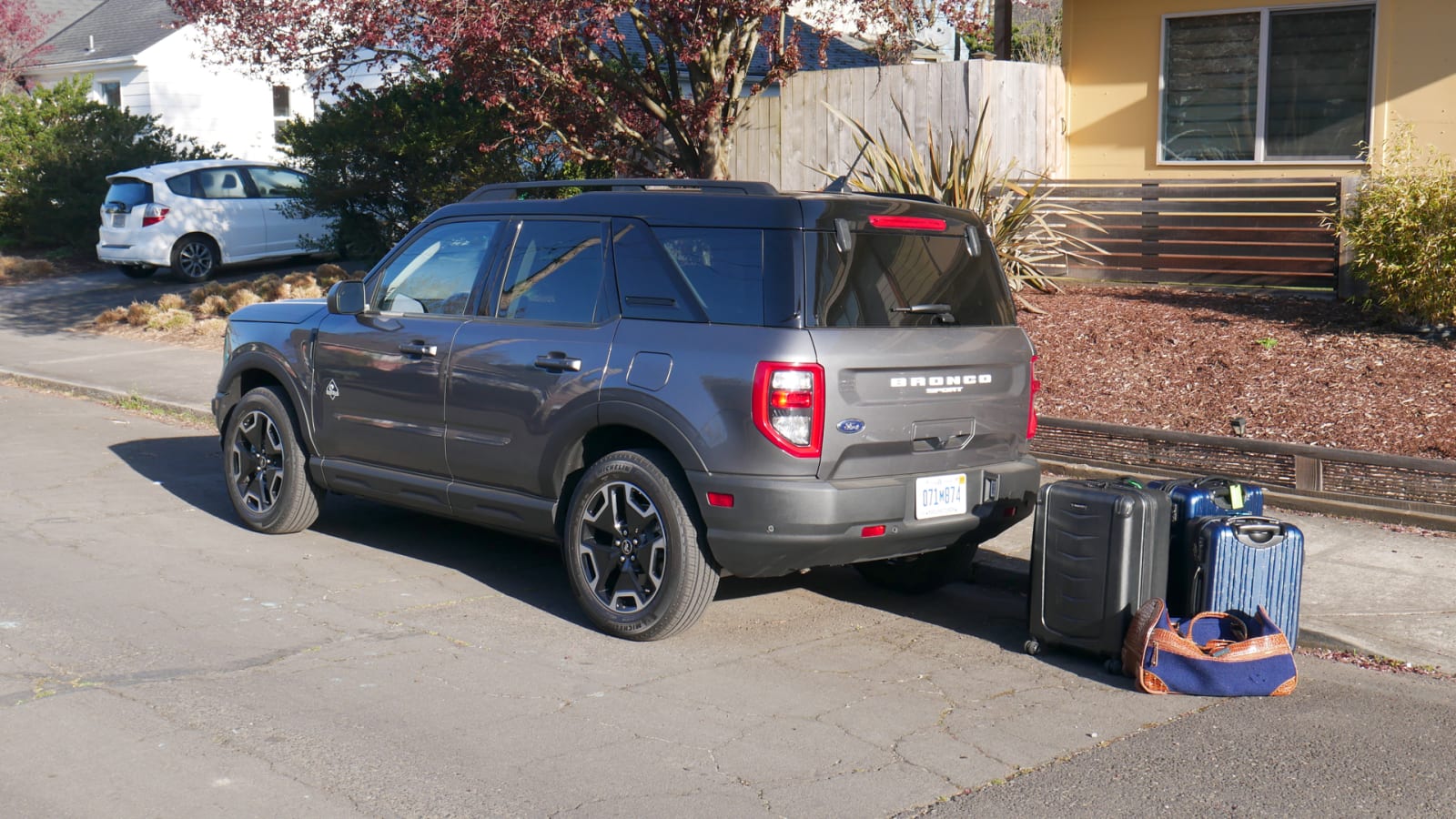 While the First Edition is no longer sold (it's no longer the first model year), basically everything included is still available elsewhere in the Bronco Sport lineup, including the oh-so-cool Cyber Orange paint. 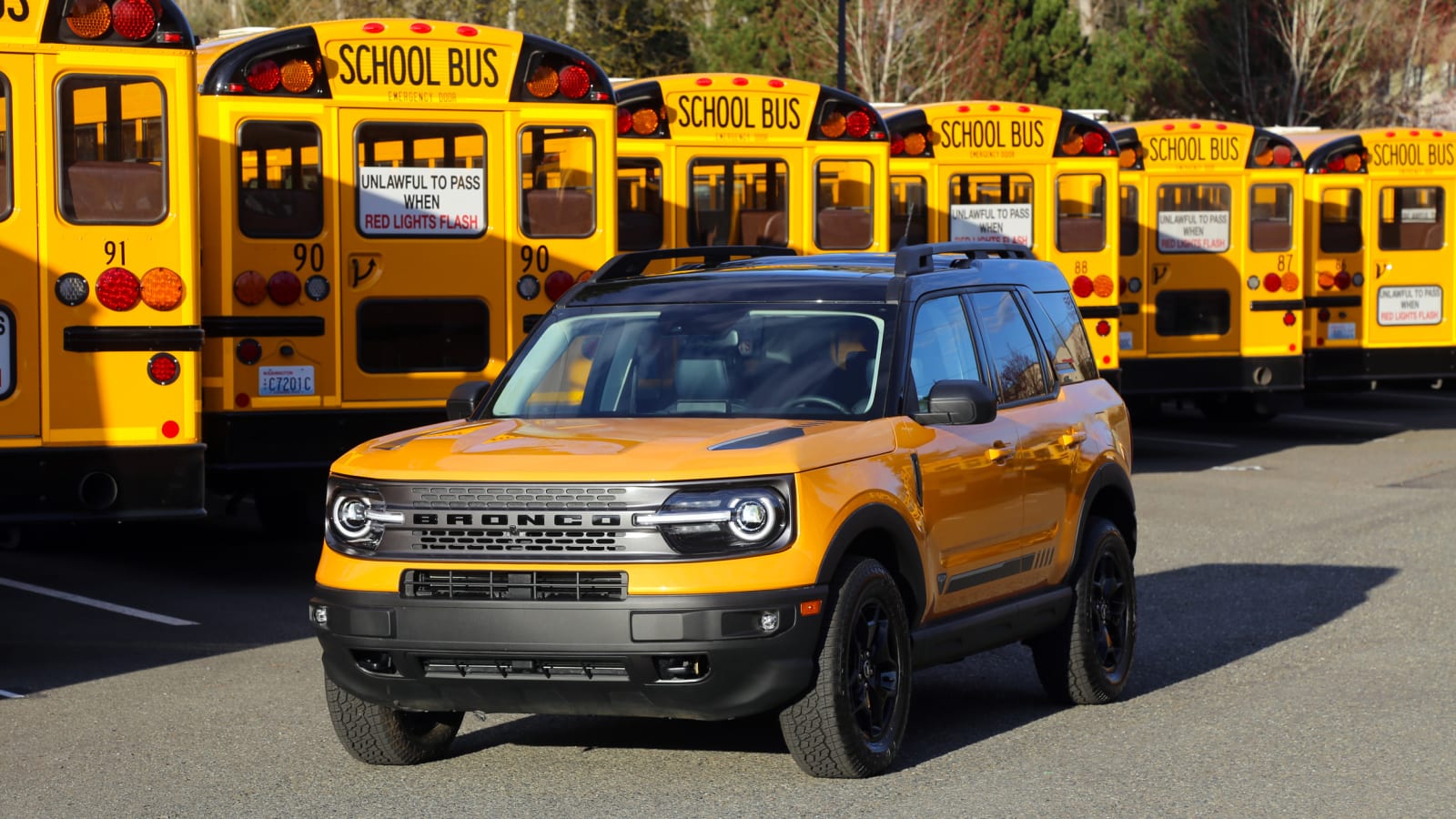 Engineer Dan Edmunds takes a close look at the Bronco Sport Badlands suspension, explaining how it all works and what the effects are. 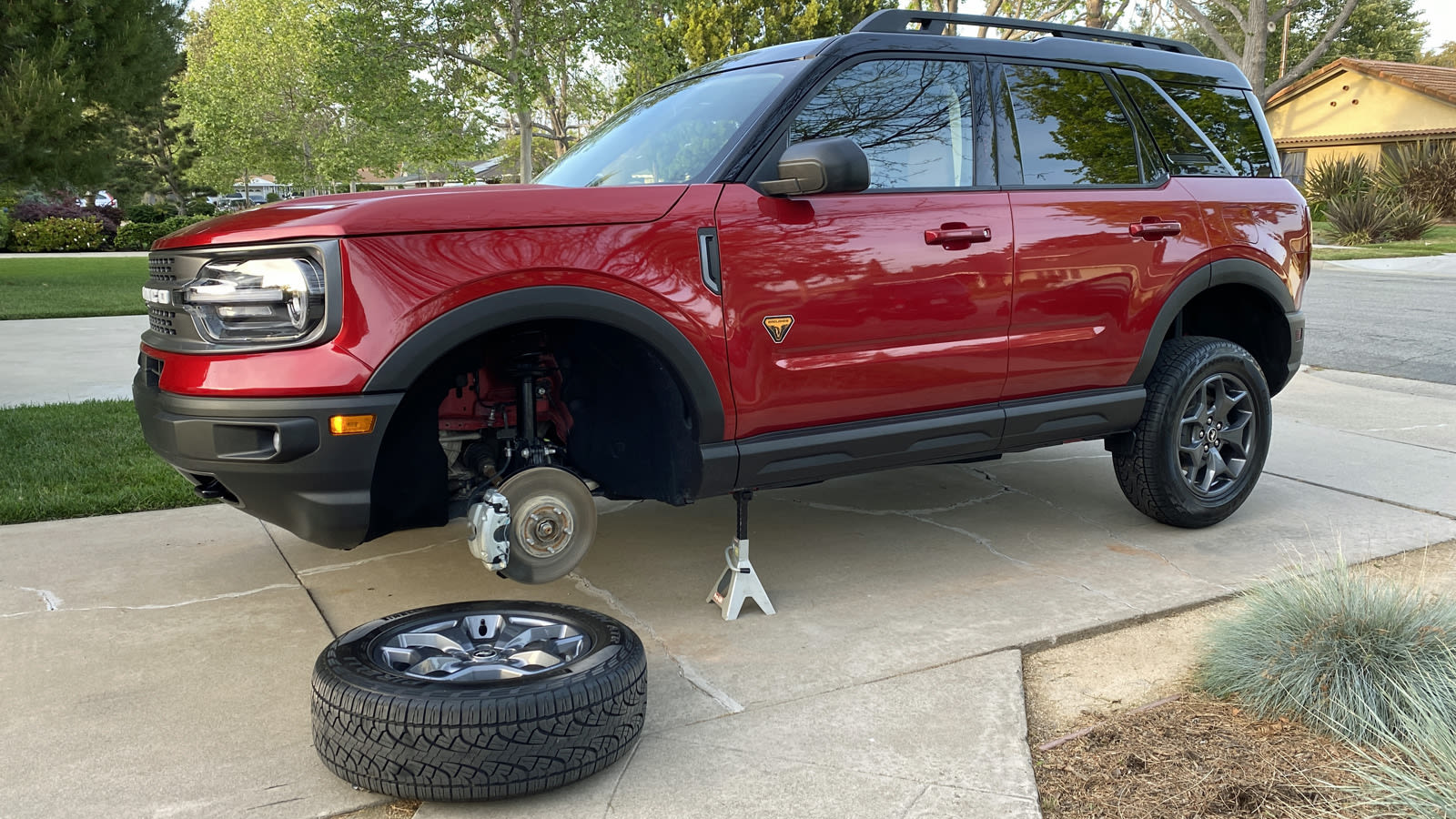 We sit down with the design team to learn what went down behind the scenes. 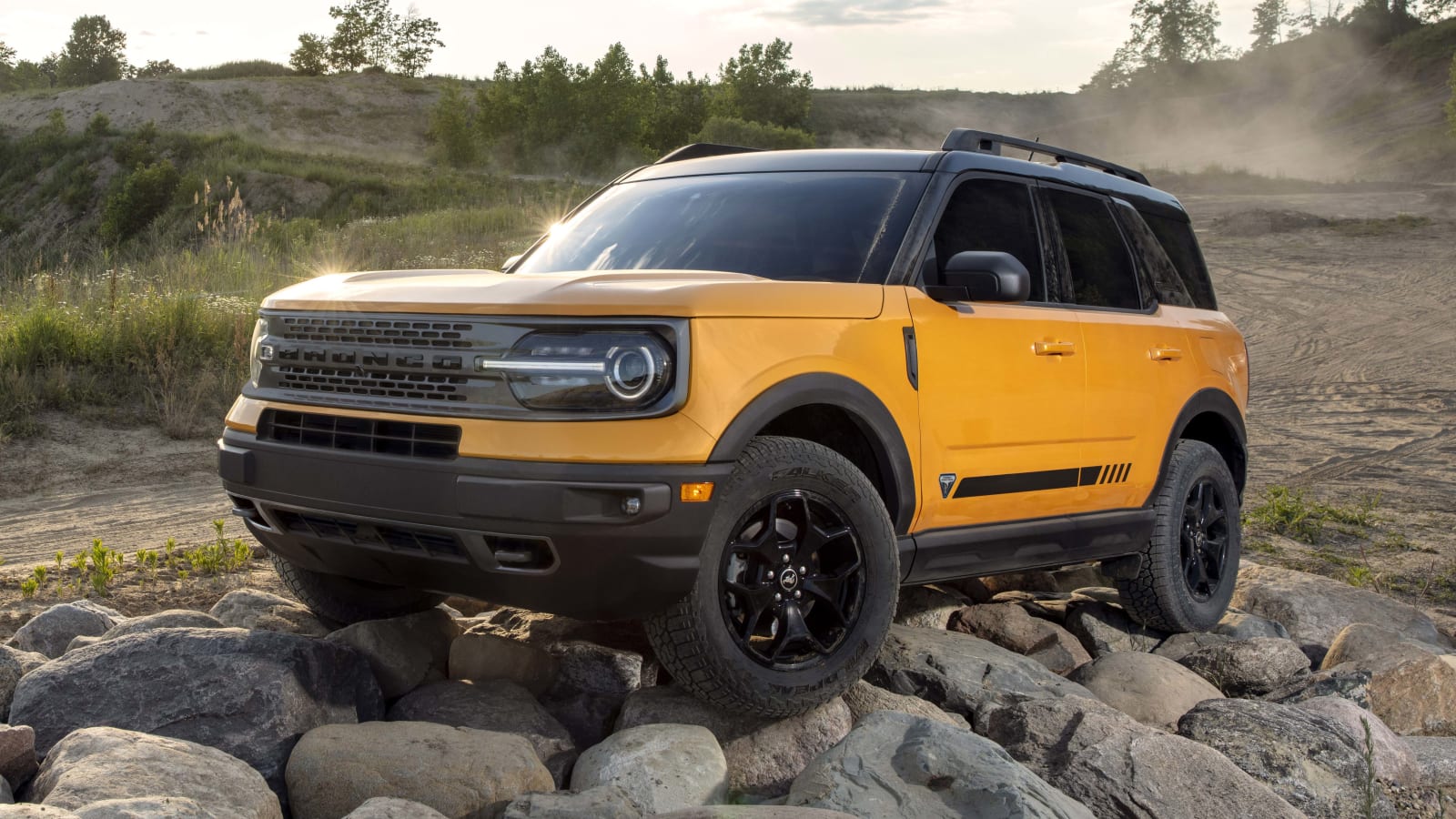 How much is the 2022 Bronco Sport price and what features are available?

The 2022 Bronco Sport pricing starts at $28,760, including the hefty $1,495 destination charge applied to all prices below. Keep that in mind when comparing prices to competitors that all Bronco Sports come standard with all-wheel drive.

The base Bronco Sport comes standard with steel wheels (not the cool kind), halogen headlights, a manual liftgate w/flood lights, roof rails, manual driver seat adjustment, single-zone manual climate control, cloth upholstery, eight-inch touchscreen infotainment (w/Apple CarPlay and Android Auto), a six-speaker audio system and a suite of driver assistance features we’ll detail in the safety section below. The Big Bend is probably where you want to start your shopping given its alloy wheels, extra sound deadening, proximity entry and push-button start, rear privacy glass, auto climate control, easy-to-clean upholstery, and the MOLLE straps on the back of the front seats. It's also eligible for a lot more options.

The lineup then splits in two directions. The fancier Outer Banks (pictured at the top of this page) adds a ton of comfort and convenience features, plus the colorful interior options. The max off-road-oriented Badlands includes the same comfort and convenience items, but with different interior color and exterior design cues. Crucially, it also includes a huge array of off-road goodies like the torque-vectoring rear diff, additional transmission and rear-drive coolers, bash plates, front tow hooks, all-terrain tires and unique Badlands suspension.

What are the Bronco Sport safety ratings and driver assistance features?

Safety ratings are excellent, with the government giving it a perfect five stars for overall, frontal and side crash protection. The Insurance Institute for Highway Safety named it a Top Safety Pick+ for its best-possible performance in all crash tests and for its crash-prevention tech. Even its standard headlights got the best-possible "Good" rating, which is almost unheard of.